Haiti: Ariel Henry to call for a pooling of all forces to retain the country from sinking into the “abyss”. 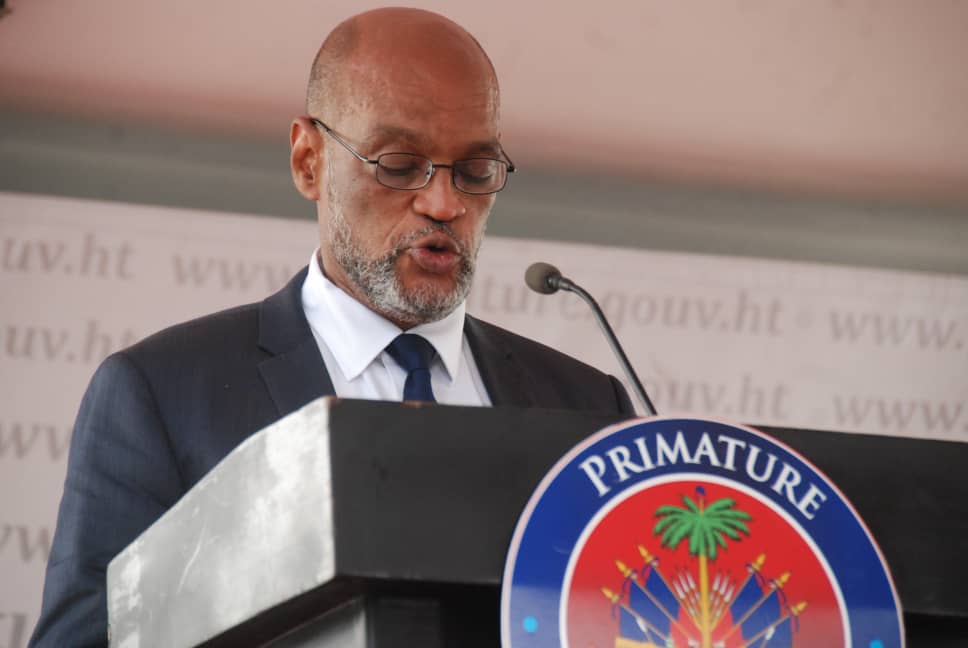 The new prime minister Ariel Henry commits to unify Haiti but count on the involvement of the “vital forces” of the country as he takes over a new government of 18 members on July 20, 2020, two weeks after the assassination of the president Joseph Moise in Port-au-Prince. Organizing credible election as soon as possible represents the main agenda of this transition team.

“We all admit that the issue to the Haitian crisis comes from the Haitian actors, men, and women, to coalesce so we can get out of our trouble”, acknowledges Ariel Henry during his inauguration on Monday July 20, 2021, in Port-au-Prince. “This condition is sine qua non to any sustainable change”, he said while expressing his intent to resume discussions, he said, he had already initiated with all the “vital forces of the nation” once appointed on Monday July 5, 2020. Henry’s goal is to achieve a “consensus” resulting in a “political agreement” around the country’s governance. “The road of change and metamorphosis of our country goes through the adherence of all sectors to a pact of governability”, he goes on, quoting a former Haitian socialist politician, Serge Gilles, recently died.

Ariel Henry is aware and warns that this essential political agreement does not necessarily require to signatories to be friends, but competitors who are conscious about their wrongness to maintain their “endless quarrel”. He points out that personal interests and those of the Haitian people lie on a “compromise solution, a paradigm shift [and a total] break”, underlining that he is “from a school that prioritizes dialogue as the leading way to resolution conflict, especially when it is about politics”. He nevertheless promises that all the issues can be object of debate except “democracy, law and elections” so that we can “prevent the country from sinking into “abyss”.

Insecurity remains the biggest challenge to elections in Haiti.

Certainly, the mission of Haiti’s new government is to organize good elections at the end of the year, unless the political agreement which the prime minister is looking for envisage an extension of mandate. However, Ariel Henry mentions some prerequisites to that, including “making the justice system credible, fighting against corruption, smuggled goods and all kind of illicit trafficking”.

This new government’s inauguration takes in a Port-au-Prince that is mostly under armed fractions control. Kidnapping has become the most rentable economical activities for months with even high school students are not exempt. Population from many neighborhoods abandoned their home to escape from violence face of which the police seem powerless and which officials and members of the affairs sectors are accused in. Moreover, insecurity has always been the biggest challenge to the organization of elections in Haiti. People with interest such as candidates and their sponsors often resort to gangs to either stir up troubles in areas where they have little voters or to literally burglarize electoral centers.

Ariel Henry guarantee that his government will address the security issue as he takes the commitment to “create a secure environment” indispensable to, among others, the “recovery of the politic activities”, in reference to the upcoming electoral process. He then enjoins the police and army to assure their lawful responsibility in this sense while engaging to enhance their “operational capacity” to “win the struggle against insecurity” together.

Ariel Henry, a neurosurgery born in 1949, had to become Jovenel Moise prime minister, but a commando killed the latter in his residence on July 7, 2021, at 2 o’clock in the morning, 48 hours after the nomination. Claude Joseph who acted as an interim prime minister since April, tried to keep leading the government until the next election, but he ended up stepping down under the requirement of the powerful ambassadors accredited in Haiti.

Haiti: A New Government from now on

Captaincy and Leadership in Sport

Concacaf Goldcup 2021: Canada and USA to complete the last four board.